it is now more than a month ago since I put something on the news category. The reason is that I am working on lots and lots of backend stuff which is not that fancy to show off. If you are watching the Pixel Tennis Progress topic, you already saw some "//2018xxxx" entries which pointed out some new things. All of them are quite relevant, but were not that important for a dedicated news.

As it is about time to keep you updated, I am going to summarize the latest development of Pixel Tennis.


Gameserver
The most basic version of a gameserver is "already" finished. It can take care of player logins and matchmaking (lobby/room system). As stated in the FAQ, your forum account will serve as your login. You can have more than one character assigned to your account in Milestone 1 (M1). 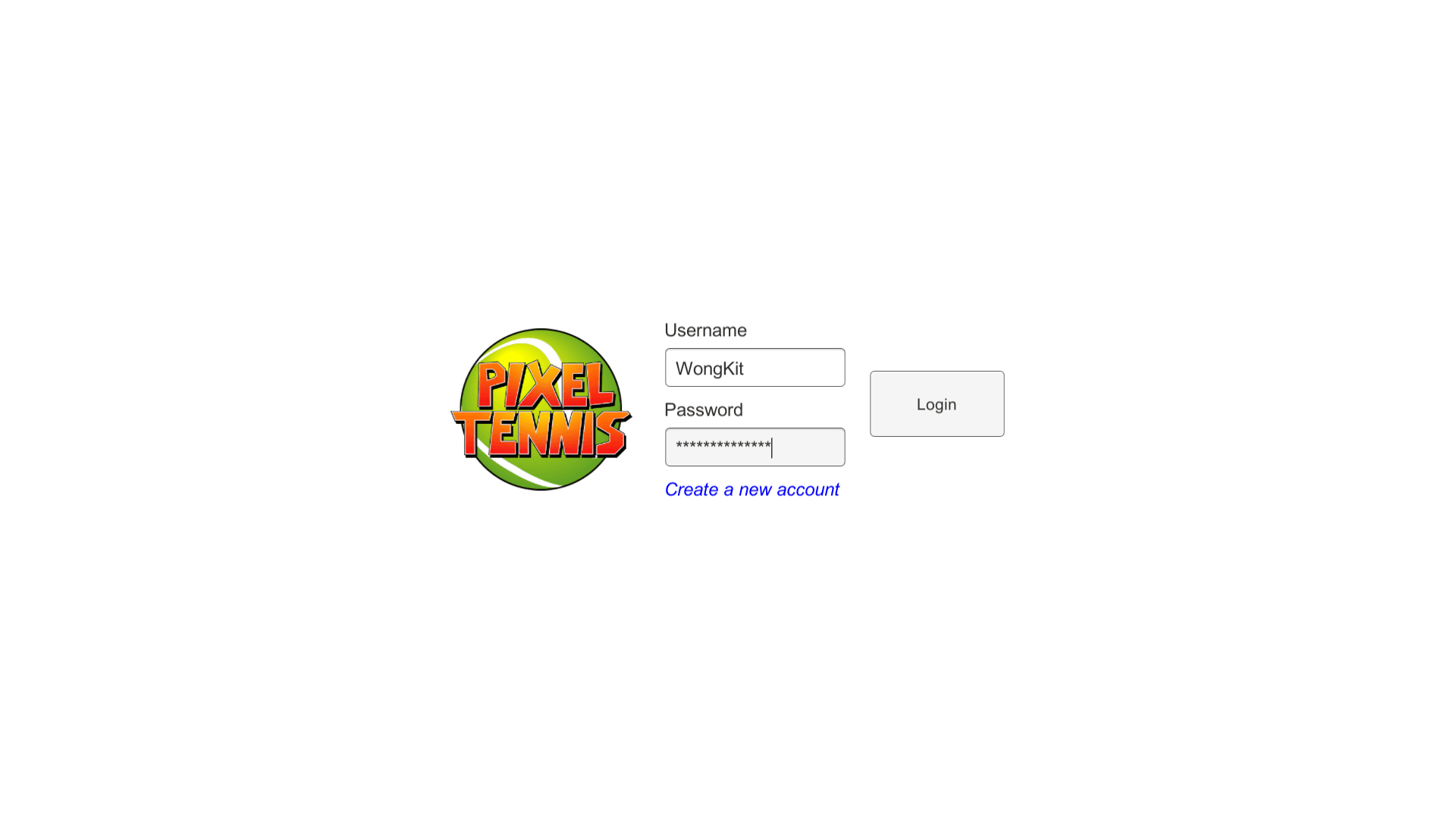 User interface
Finally, there is something like a main menu where players can navigate through. It is compatible with 4:3, 16:9 and 16:10 aspect ratio. The screenshot below shows the lobby where you can list, create and join rooms created by players. There is also a way to text-chat with all players waiting in the lobby, although it is not fully functional right now. 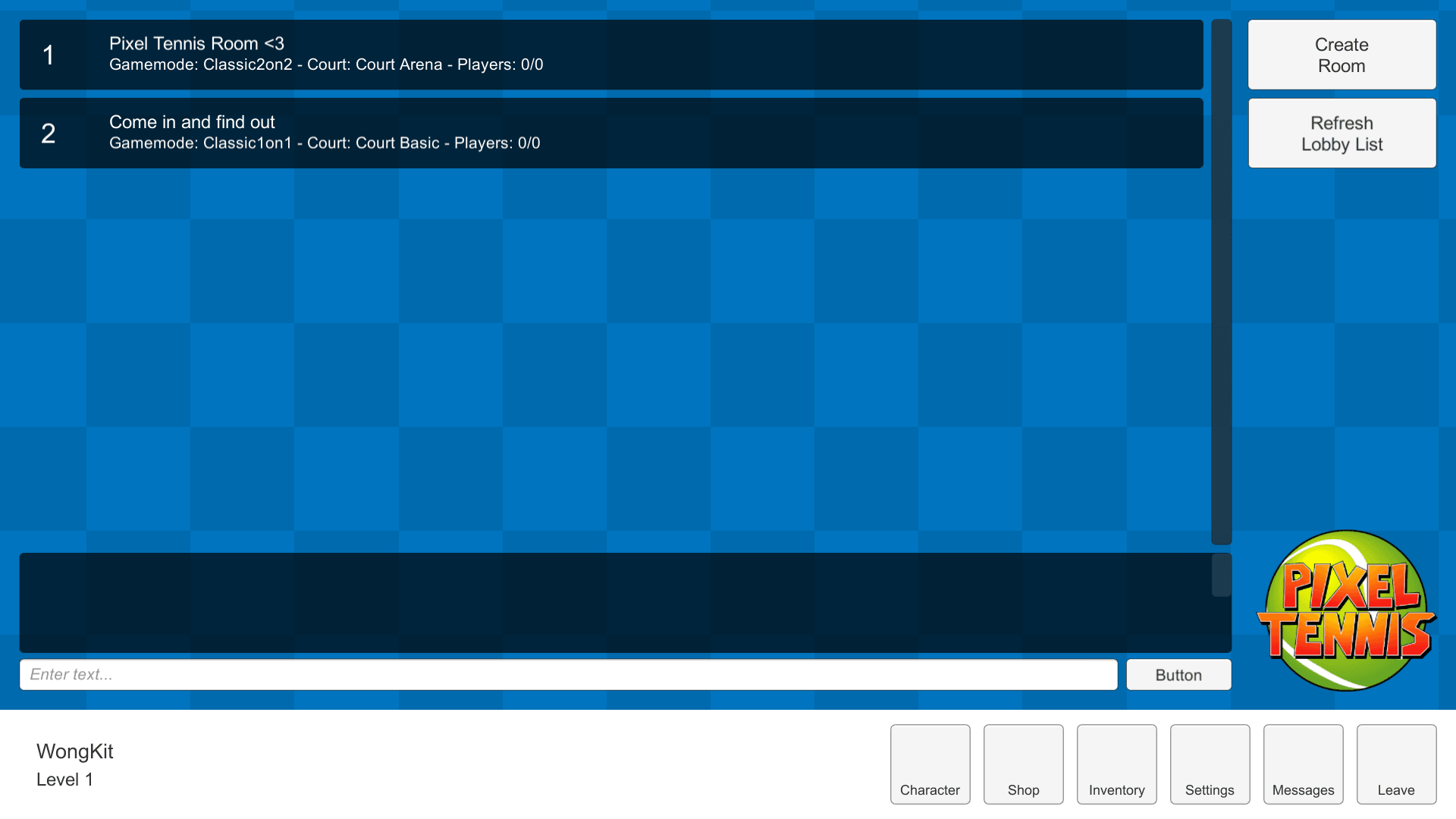 
The UI for a player room is also more or less functional. Switching slots is working and there is one room master which can initiate a match when everyone is ready. The "Tic Tacs" are just dummies for the non-existing character models. 
I think you know that, but I still like to point it out. Everything shown in this topic is still in a very early stage and most likely to change in the future. Many functions are still missing or in a "just working somehow" state :). At least, this is an indicator for you to see in which direction the game will develop. 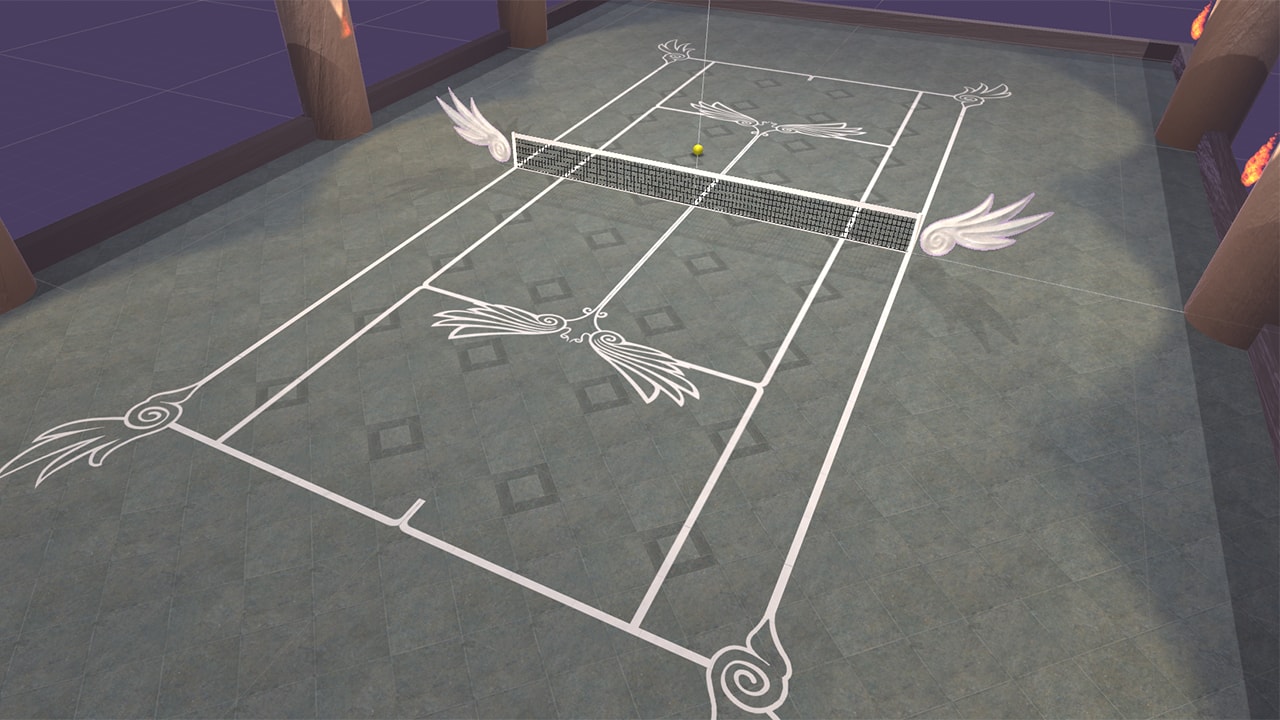 Waiting room music
A very big "thanks" also goes to our user Hibris who created a music track for Pixel Tennis. He made it up from the scratch and also provided me several variations including a faster version. When I listened to it for the first time, I got hit by a nostalgia flash - dunno why... :)

The full track will definitely appear in M1!


Internal live tests
With the changes mentioned above, there was an early internal live test in the past week where the gameserver was booted up on my external hosted Linux machine. Together with Hibris, we were able to create a match and play against each other online via peer to peer.
In general, this is a great progress, but it also shows me, that there are still many issues like balancing and lag compensation I need to resolve before a match actually makes fun.


That's it for now. I guess, the next [devblog] update will take a while as there is a huge requirement on backend work including network communication. I will keep the Pixel Tennis Progress topic updated from time to time, so check it out every week or so.

As always, this project heavily relies on your feedback, so feel free to comment on everything you want. This time, I am also very interested in your opinion on matt090's and Hibris' contributions!
Somehow related to an online tennis game.
Top

Mind is blown! Awesome lobby music clip, and great job on the court! My only comment would be that the wings on net sides look sorta flat/2D-ish, but that's a minor thing that shouldn't be hard to fix.
Moreover, perhaps it'd be interesting to check out mario tennis for switch as inspiration for what other things could be added later on to the game, if need be:

But in all honesty, all the progress really brings a big smile on my face. Kudos, you guys rock.
Last edited by WongKit on Sat Apr 07, 2018 5:43 pm, edited 1 time in total.
Reason: Fixed youtube.com code
Top

. Is it working/ planned to work full P2P with one of the player hosting the match?
The lobby also music seems pretty well done!

I just outright copied FT with pros and cons there

I could hand in a displacement to Wong however.
Top

kek, I guess I never paid much attention to it on FT then!
Top

Yes, matches are established over a peer to peer connection where one player is serving as a host. There are downsides to this, but this is the most efficient way for network play in M1.


KarlaGrey wrote: ↑Sat Apr 07, 2018 10:44 amMoreover, perhaps it'd be interesting to check out mario tennis for switch as inspiration for what other things could be added later on to the game...

I am already following the development of Mario Tennis Aces :). I like the timing related blocking and the multi purpose energy gauge. Maybe something like that will get into Pixel Tennis at a (much later) stage.
Somehow related to an online tennis game.
Top

Awsome stuff u got done already so hyped for this and once again keep it up !:D
Top

...
i dont have anything else to say other than AWESOME ... im so glad youre keeping on the grind of working on the game, i love the results so far, impressive music !! everything looks super clean and well done.

im HYPED af. i wish i could contribute with something ... but i dont have any skills needed to help you guys ... i think?
if you can think of anything, just let me know

Wow, really exciting news. Everything looks so clean, the music brings back vibes I had from FT.
Good job man, I'm more than pumped for what's next!
Top

The progress is looking pretty good! Looking forward to it.
*Aboarding the PT Hype train*

Thank you so much bro! You did a awesome job
When can we play it? I’m looking forward to that day.
Honestly I can’t wait to play it.

And let me add, in parenthesis, if possible I can help with dubbing

I am really happy to see that someone with the actual skills has started this. Pretty impressive what i've seen so far. If there's anything we can help with let us know I definitely will spread the word.

With love for your work and all the ppl that feel the same.
Top

THE PLAY OF THE WORLD IS THE MOST APPRECIATIVE GAME THROUGH MY LIFE, ITS SUPPORT TO YOU FROM YOURSELF TO BE SUCCESSFUL. GOOD LUCK WIT
Top

Thank you all for your comments, I really appreciate that!
Somehow related to an online tennis game.
Top
Post Reply
16 posts • Page 1 of 1