I am happy to announce some big changes regarding Pixel Tennis‘ future. I spent a lot of work in the game so far and also invested money to rent servers and purchase assets from the Unity store. When I look at the donation count (0), it is quite easy to understand, where this is leading.

WongCoins
Pixel Tennis will stay Free2Play for everyone, but the game’s first release will feature a premium currency called WongCoins (WC) which are highly optional of course. 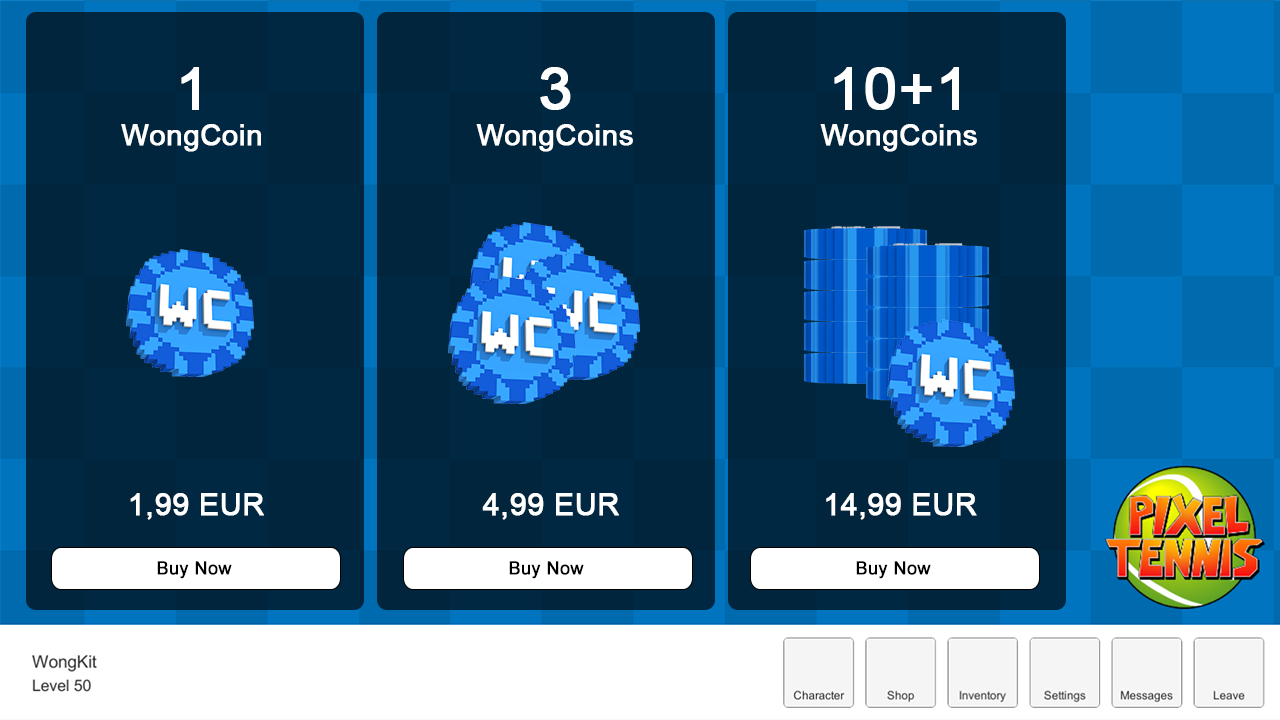 
As you can see, you can purchase 1, 3 or 10+1 WCs for the prices of 1,99 EUR, 4,99 EUR and 14,99 EUR (best value). The prices for other currencies will somehow correspond to them, but can differ based on the country. Purchases can by done by PayPal or SMS (with additional charge). This is a great way to support me the game during its development!

So what can you buy for WongCoins? Most of the stuff only contain temporary effects like increasing stats for a certain amount of matches or blocking special shots. 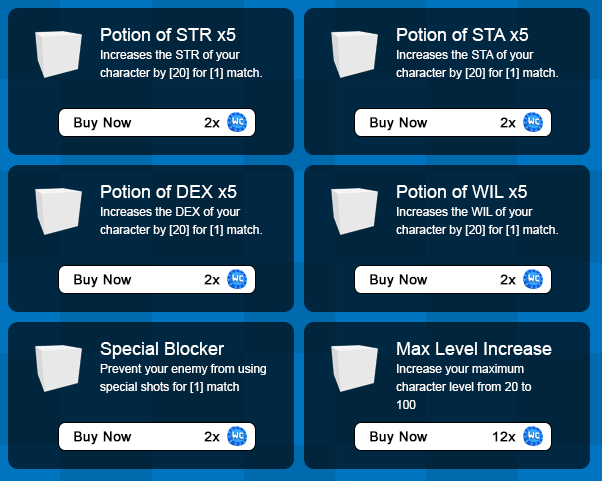 
However, the final list of items and effects is still to be discussed. Do you have any recommendation? Let me know!

Pixel Tennis Mobile
The biggest market for games is the mobile section, so I decided to develop Pixel Tennis as a mobile only game. As a PC version is technically possible, I feel like it would give players an unfair advantage, because of the superior performance and controls on that platform 
Speaking of controls - Pixel Tennis will run with on screen buttons (design not finished) in a revolutionary portrait mode. I hate other mobile games for running in landscape mode, as I cover the important parts of the screen with my fingers…

Battle Royale
Today, everything “needs” battle royale. Fortnite has it, Battlefield has it, even ****ing Tetris got its own battle royale version. So it would be a shame to miss this opportunity for Pixel Tennis! I cannot go into much more detail right now, so I can only tell you, that you can have up to 64 players playing against each other in a match! Oh, and you need to have purches WCs once to be able to play this mode. 
So these are all updates for today. Tell me what you think :)
As always, I heavily rely on your feedback. This time, I also created a poll where you can vote on the overall impression of the improvements!
Somehow related to an online tennis game.
Top

First of all, we all appreciate the work you're putting into this and understand why you must have some type of currency to support the game, but I see two huge problems here:

1. Take this more as an advice, do not go mobile. We (and I think I speak for many other future players) do not like mobile games for many reasons (most important, it doesn't have a mouse and keyboard), the interested players at the moment are old fantasy tennis players looking forward to this, but it will come as a disappointment when they see it's mobile and I'm not sure how many will play. I will surely not, sorry.

2. If I remember correctly, a few months ago you said the game will be free2win also. I understand the reasons behind wanting to have currency to support the game, but this is not the best approach. We don't want to have to pay just in order to keep up with other players, but we will happily pay to support the game in other ways and that is cosmetics.
Many other games have a much better success like this (CS:GO, Dota2, etc.) and I think that is a better alternative. I think it is in our best interest (yours and the player base) to have a free game and play2win with cosmetics, instead of pay2win and the most important reason for that is that you want to attract new people to the game also, not just the older FT playerbase.

Do not take this message as a personal attack or whatever, it's just my honest oppinion. I was looking forward to this project and the others, checking everyday for new developments and stuff, but I am very disappointed by the way you want to do things right now.
Top

I like the changes you posted. It shows that you are interested in continuing to develop a game that will bring fun to all players it is going to have some day. It is good to see you working on topics to make the game fit into the modern gaming age. Every game needs a battle royale mode and because I like battle royale game modes I am very interested to see how it will work for a tennis game. I'm looking forward to make a new test video when the battle royale mode is available

Putting aside the fact it's 1 April (; (nice poll!

), I'd love to see some pets, special name tags, cosmetics accessories (various hats, wrist wraps, racket skins and other similar gadgets, which would be applied for a limited period of time upon purchase). That said, I think having one's own 'house' or training hall would also be a great way to drive the purchases, as you can buy furniture and decorations.
Moreover, having the option to buy temporary/permanent stat increases is also fine so long it's not game breaking, but a player should have the chance to opt out of matches where opponents/teammates use stat boosters.
Also, the part about Battle Royale sure cracked me up, kek.
Keep up the great work, as usual.
Top

I am happy that you choose this way of game design. And 1,99€ seems fair for a buff which you can use for 1 single match. Finally you will earn your own money with this game. So if I can help you with the backend development, you should start to pay me a small salary every month.

Anyway the name of the new currency isnt that good! Maybe you should create a second currency "BoneKitCoin" for 2,99€ each, so like an advanced WongCoin

Ty for the work but iam absolutely with @Christian. I surley will not play it if u deceide to go mobile. I am a litle bit dissapointet to be honest.

I expected something else when I read the title, but I can understand why you chose to do so.
I have to admit, the points that Christian says in his reply are the ones I also think about this topic - but on the other hand we have to respect the work you gave into this and also that realisticly speaking, even if it's a work of passion, money is something you can't ignore.

As long as it's not game-breaking, I'm fine with it - it supports the game, as I trust in you that everything goes into this project.

Mobile, however, is something that's very controverse. I think almost every game is p2w and on top of that, a worse gaming experience than on the PC. But there are also some examples that offer almost the same gameplay (e.g. Hearthstone, but it's a card-game though). A tennis game on mobile could be something great and chill to play, but only if it's almost the same as the PC version and fun to play.

But, overall, I'm more than open for these to see where it goes. IMO you should still prioritize Pixel Tennis and it's gameplay, mechanics, whatever and then think about mobile stuff.

As always wish you best of luck Wong, I'm sure your work will please everybody in this forum

sometimes, it is really hard to see irony or sarcasm in written form, so let me just clarify this topic.

1. WongCoins are cool and nobody voted negatively in the poll ^.^
2. None of the announced „features“ or changes are true. They are all the result of this years April Fools‘ Day. So all of you, who thought that I will turn Pixel Tennis in a money milking mobile machine (with battle royale) - Don’t worry, this will never happen :)

All in all, it is very positive to see, that honest replies did not turn into insults, but offered constructive criticism with suggestions for the game!

Do you like your salary in WCs or BKCs?

By the way, at some point I really thought about how a battle royale mode in Pixel Tennis would look like...
Somehow related to an online tennis game.
Top
Post Reply
8 posts • Page 1 of 1