the year is almost over and it is time to review what happened and what is coming up next.

But first of all, I want to apologize that there were no big news or videos regarding the development of the game. Lots of important changes to the backend and bug fixes were done, but none of them were suitable to be part of separate news. If you are waiting to play the game, you certainly do not care about client-side encryption for logins or changes in the networking code in the first place, which is totally fine.

On the other hand, I planned to spend more work on Pixel Tennis than I was actually able to do. This was mostly because of motivational issues due to a requesting job and other various reasons. But hey, as I am currently on vacation, I am getting more fun again to continue the work on the game. It is interesting to see how a point of view can often change between “I have to work on something” and “I want to work on something”.

So let’s see what is actually new:

Improved UI with a new title screen
Along with the animated title screen also comes a new music track that was composed by Javril Young aka Onigiri. You will get the chance to listen to it on the next update. 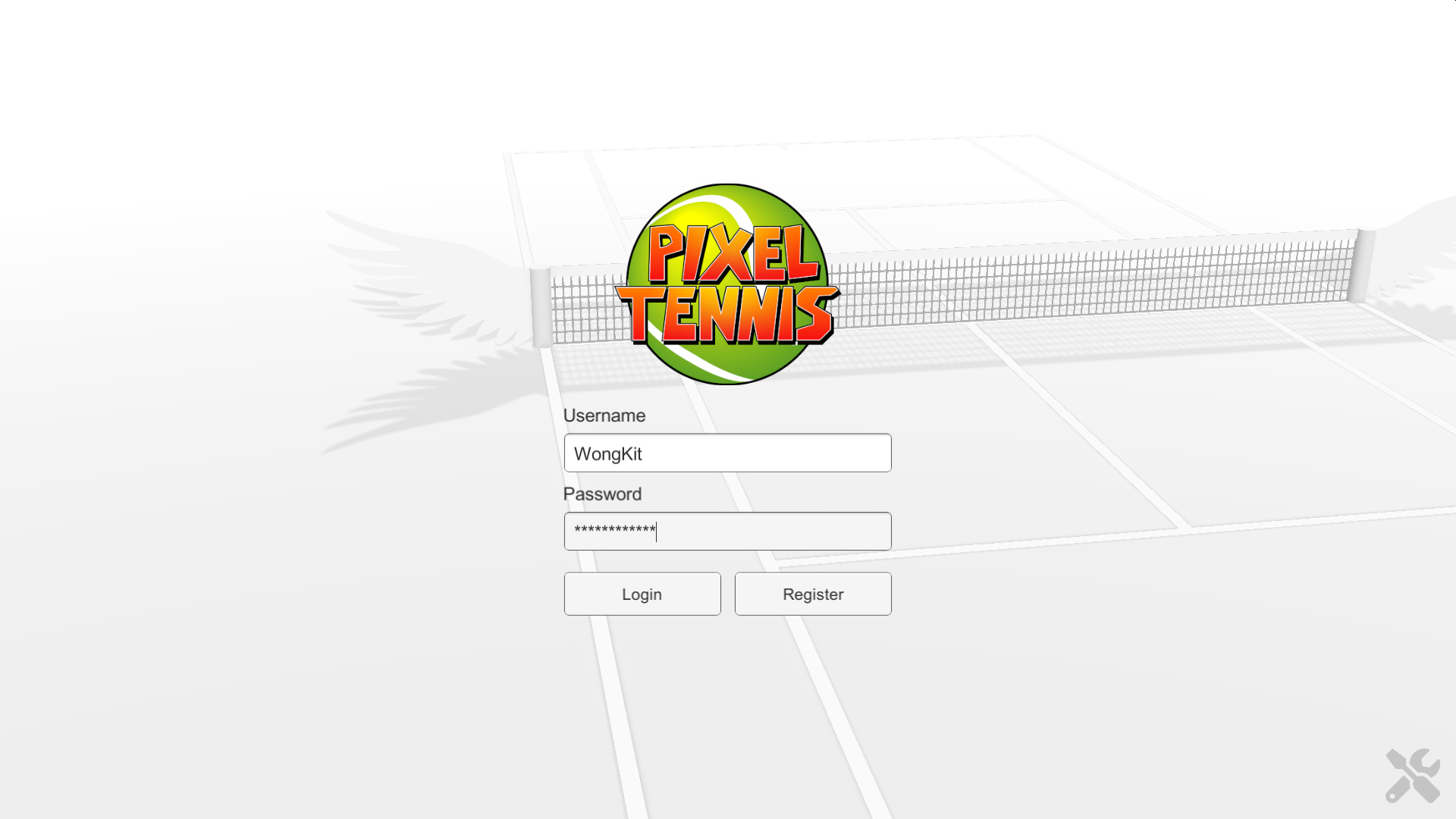 
Character model
The game now visually distinguishes between a male and a female character type (names are most likely to change in the future) with support for further character “classes”. The models now also have an idle animation and look towards their movement direction while in a match. I know that this is not a technical masterpiece, but it does give the game a bit more lively appearance. 
As written in Searching someone for 3D modeling and animation, I am still looking for volunteers. Sadly, I need to point out, that I only look out for people who seriously want to support this project. In this year I got offers from multiple people who at some point simply stopped communicating with me or promised things that were never delivered.


Character progress and skill points
Character creation was added and Pixel Tennis now has a basic RPG like skill system. This means, that your character gains experience for completing matches and increases its level. For each level, you can increase one of your attributes (strength, stamina, dexterity, will). 
Win/Lose statistics are also tracked for each game mode and determine your or your teams strength.
Along with experience, you receive pixels, the ingame currency. You will be able to obtain equipment, items, and additional character slots with it at a later stage. The shop/inventory system is not done yet.


Settings
It is now possible to configure certain elements of the game like music/sfx volume, screen resolution and graphics quality. The menu can be either accessed by pressing the tool icon or pressing escape during a match. By the way, the UI is designed to be fully translatable, so support for multiple languages can be added, although it does not have a high priority right now. 
Chat
Pixel Tennis now has features a more advanced chat system that is now also accessible during matches. You can press enter to show/hide it while in a match. With ctrl, you can easily switch between all and team chat.
With @charactername, it is also possible to message a specific player that is currently logged in. He or she can see the message in the lobby, in a room or while playing a match. 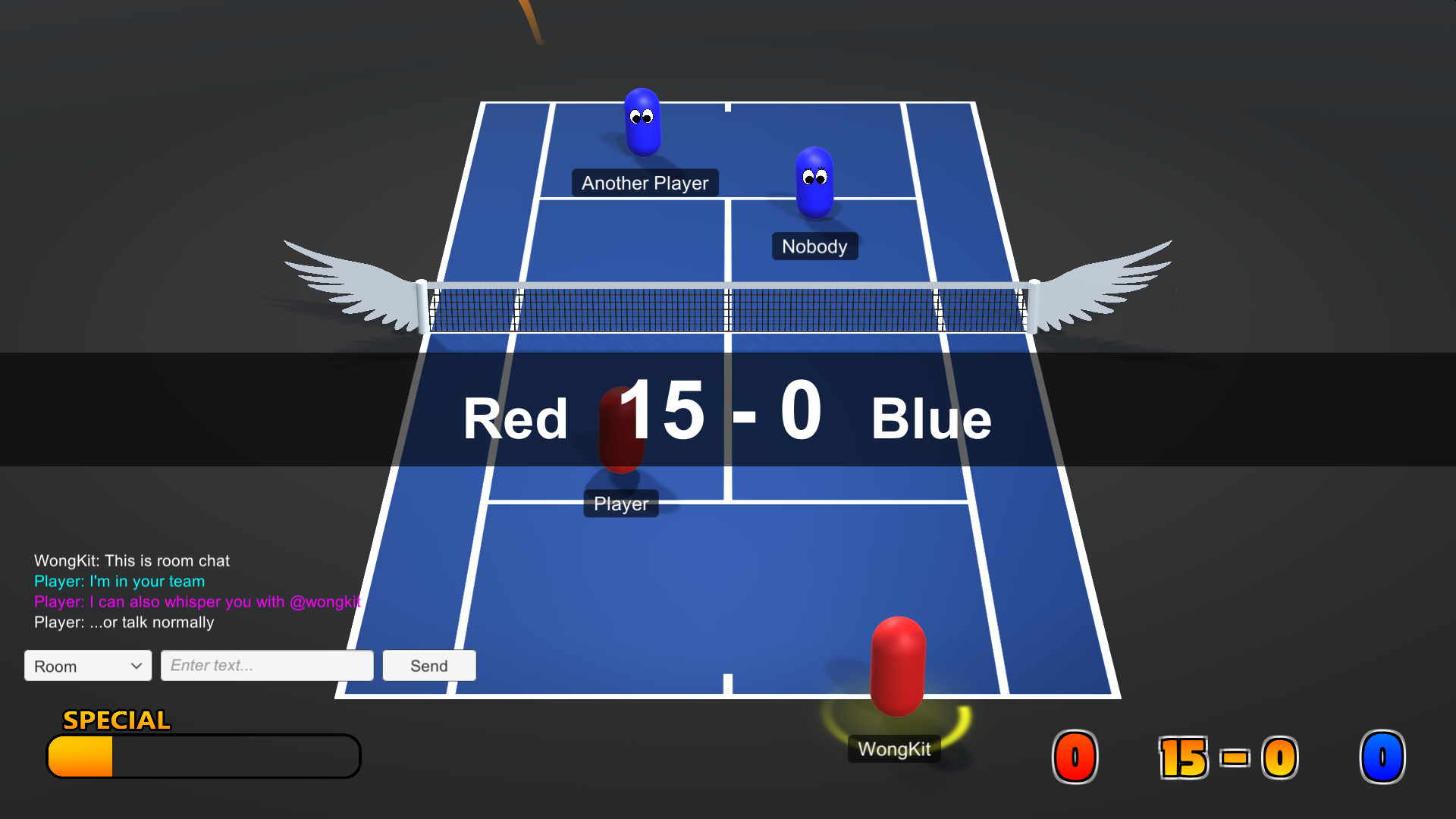 
Although a chat is nothing groundbreaking, I still think that communication possibilities are very important for the game experience.


Multiplayer networking
The games networking code relied on Unity’s networking framework UNet along with a paid extension to manage peer to peer connections between different kinds of network environments. Working with peer to peer reduced server load and is more or less the low-cost way of establishing a multiplayer game. UNet was far from being perfect, but it was good enough.
Unfortunately, the creators behind Unity decided to deprecate the framework without providing a compatible any kind of replacement, which means that Pixel Tennis was stuck on a Unity version that becomes more and more outdated.

TL;DR, I spent a lot of time and effort to research suitable alternatives and finally decided to write a custom networking framework, which also ditches peer to peer in favor of a semi authoritative server approach. This comes with some advantages like increased network compatibility (because port forwarding sucks!) and better protection against client side manipulation. However, it also increases the cpu and network requirements on the game server, where we need to see how well it performs under heavier load.


What is up next?
Pixel Tennis is nearly feature complete for its first Milestone 1 release. Nonetheless, there are some important topics like lag compensation and balancing that need to be addressed in the next year. All in all, I am very confident, that there will be a preview release in the first half of 2020. As I do not know how many of you are still following this project (thank you, if you are still here!), the preview could be restricted to a certain time span to make more people playing at the same time. What do you think?


Finally, there is nothing more to say than wishing you a happy new year and a good start in 2020!
Somehow related to an online tennis game.
Top

I always follow your job ! nice to see some news.
i wish you a really happy new year !
Top

Amazing news, I actually don't care how long we will have to wait to play this. You put in a lot of work and I appreciate it very much. It's coding/network stuff that I don't know anything about, but it's very important to build the foundation that the game is later based on and I trust you and your project with that.

Hope you had a great year and wish you the best for the next one and we'll hopefully will be able to play it!

I was checking out the progress of this project and i have to say you're pushing a lot of updates, lag compensation is not easy stuff, keep it up!

If you have an idea what you want to update in you track - sure, go ahead :) But I am already very satisfied with the current version that is the title theme in M1.

There is also the other unused track of you, that I still have not managed to implement into a fitting scenario / court. I like your work, but it would be bad of me, if I want you to create more tracks if I have not utilized the previous ones you did for me. ^^"
Somehow related to an online tennis game.
Top

If you have an idea what you want to update in you track - sure, go ahead

But I am already very satisfied with the current version that is the title theme in M1.

There is also the other unused track of you, that I still have not managed to implement into a fitting scenario / court. I like your work, but it would be bad of me, if I want you to create more tracks if I have not utilized the previous ones you did for me. ^^"

Thk u bro. Umm, I'm not sure if you think so. I think u want other new tracks, doesn't it? Yeah, that's what I mean. I mean i can do more new fresh track for you if you like. I think i have some new idea about it, and i would like to do more to make it better. U can claim me whenever, you are the boss of us... loollllll....
Top

If you tell it this way - yes, please create more tracks and/or update existing ones if you have ideas!