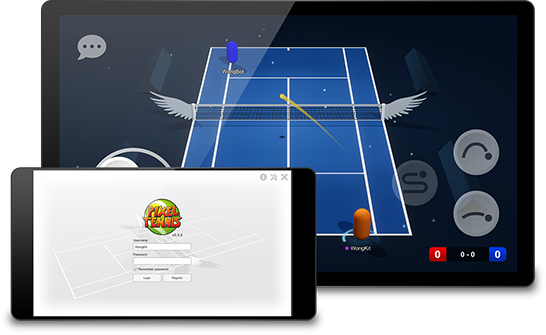 
In order to make the game playable, lots of performance improvements had to be made, which are also part of the Windows version. It now runs smoothly at 1080p at 60fps even on low-end hardware without sacrificing on visual quality. This is the performance comparison between the current version and the previous build on a cheap 10” notebook with Intel integrated graphics. 
Speaking of framerates - the current version offers a new powersaving mode, which basically reduces your framerate to save on battery power. Of course, this only makes sense in mobile scenarios.

UI refresh
With the redesign of the website, it also was time to slightly update the ingame UI. Menu elements received a more three-dimensional look and fade in while opened. It is no complete overhaul, but a logical improvement. 
Receiver indicator
As Zoe requested, beginners might need a visual hint to see who is allowed to reply a serve on doubles matches. Here we are: 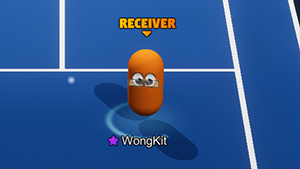 
Spectators
OjingeoSaram had the idea that spectators should watch the ball instead of looking straight to one half of the court. I really like the idea and I think it looks hilarious.


Passwords
You can now save your login password so that you do not have to reenter it at the start of the game. This feature is optional of course. If you use it, be assured that your saved password is stored encrypted on your computer. 
Speaking of passwords - Pixel Tennis offers a way to protect your game room with a text to block strangers from entering it. You can enable or disable it while creating or editing a room as the room master. You can see a small lock icon in the lobby if a room is protected. There is also a new "playing" indicator to show if the players are currently in a match. 
Gameplay balancing changes
In order to favor more balanced character builds, attributes and secondary attributes scale with diminishing returns. This means for example, that the effect of STR (ball speed) does not increase that much from 60 to 61 compared to 20 to 21. The change only buffs stats compared to the previous version. Remember, that you can restat your character by buying the "Wing of Memory" item from the shop for free.

Smashing a lob is now easier with improved collision detection and bigger player hitboxes. The chance to hit the ball to the outside of the court is reduced due to a stronger shot correction.

This list of changes is not complete. There were also lots of stability improvements and gameplay fixes as well. If you want to know about all of them, watch the Progress thread.


Pixel Tennis game server stays online 24/7
In the previous year, Pixel Tennis was only playable on certain days at specific hours. This was an attempt to make more people play at the same time, which also worked to a certain degree. However, this decision also prevents people with "unlucky" time zones or other scheduls from testing the game. Starting on April 1st, there is no restriction anymore. The server stays online so that you can try out the game at any time - at least if the underlying hardware does not start catching fire.

As always, every feedback is welcome. If you find bugs or have a suggesion – don’t hesitate to let me know!
Somehow related to an online tennis game.
Top

Re: Pixel Tennis for Android, performance and QoL improvements

Wow, awesome news! And good luck with that android version, looks really clean.
Great job overall, really like the pace Pixeltennis and FT as such are going at rn