Although I cannot give you a release date, I want to provide "some" transparency regarding the development of Pixel Tennis.

Below, you can see a very basic progress chart. The blue bars indicate, how far (in %) I am to complete the game. The grey bars indicate the remaining effort required for releasing Milestone 1.

That's right, there will be milestone releases for you to test. Consider them as early alpha versions or technical demos. The reason for that is very simple. Before finalizing the game, a lot of work needs to be done - a lot of work that I am planning to invest in my free time. With Milestone 1 (or even before), I am able to see how many people like and/or support my work. Depending on this, Pixel Tennis's future will be decided. 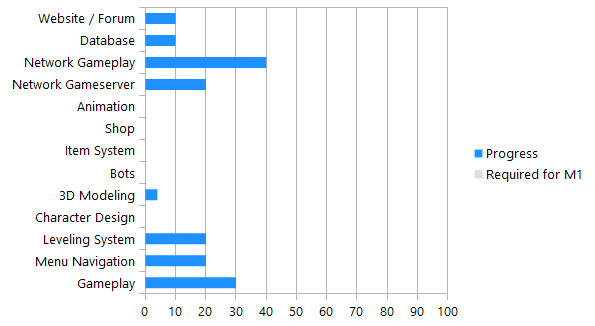 
Btw, the category order of the chart has nothing to do with priority. My LibreOffice just wanted to mix them randomly at a certain time.

Website / Forum
As you can see, there is a website / forum. pixeltennis.de is located on a German paid hoster with SSL support and more than enough capacity.

Database
The game uses an SQL database hosted at pixeltennis.de

Networking P2P Gameplay
Unity's networking system works out of the box for local connections. If you want to connect via internet, they only offer a paid method which costs per connected user which is too expensive for me.
As an alternative, Pixel Tennis currently uses a one-time-fee third party library that tries to establish a peer to peer connection. It greatly reduces server load, but can also fail in 5-10% of certain system configurations. P2P also means, that the whole multiplayer logic is handled by the clients alone.
As announced on 03/2019, it is planned to switch from peer to peer connections to a semi authoritive server instead.
Since 03/2019 all match related connection logic goes through the dedicated server using a custom network implementation.

Network Gameserver
The main gameserver is hosted on a dedicated Linux machine at a paid hoster. It keeps track of accounts and ingame progress. The user account login is handled by an external interface that verifies against your forum login.
The current version already can provide character data, chats and control creating and joining rooms.
As announced on 03/2019, the game server will also handle multiplayer logic in the future.

Animation
Beside basic animations like rotating a smash circle or giving the ball a nice trailing effect, nothing is done. Things like character animation or certain camera scenes will be done much later.

Shop
Nothing to see here. Btw, there will be no pay to win gatcha coins - never :)

Item System
I know, collecting items is a very motivating part of the game, but Milestone 1 will not have anything like this at first.

Bots
Not even started. I only have basic ideas on how to achieve this.

3D Modeling
3D Modeling is a very big topic which will require much time and effort. Luckily, a prototype can also be made of basic shapes.

Leveling System
Important as well., but not on my priority list. Will not be in Milestone 1.
See Your opinion on Pixel Tennis exp rates discussion.

Gameplay
Running, Charging and hitting a ball (Stroke, Lob) works in network mode, even special shots are available. The camera follows the player.
Btw, the court position logic (which player stays where in 1on1 or 2on2 at which state) was awful to implement...


//Note: You cannot reply to this topic, because it is only intended to work as a kind of changelog :)
Somehow related to an online tennis game.
Top

Gameplay
Score system implemented which determines points for the certain player. The score is currently handled internally and not visible as there is no UI. Fixed serve-ball-hit-ground-target-position
Somehow related to an online tennis game.
Top

Networking P2P
Revised P2P networking to check connectivity before actually loading the match. Makes sure that all clients successfully loaded the match scene before starting it.
Somehow related to an online tennis game.
Top

Network Gameserver
Rewriting complete server/client logic to make it independant from Unity core for performance and resource usage reasons on server side.
Somehow related to an online tennis game.
Top

The old logic worked still good enough for the game server, but...

Networking P2P
... Pixel Tennis multiplayer will switch from UNet peer to peer to a semi authoritative server. This means, that the server needs to process a lot more data making the mentioned network optimizations mandatory. You can read the reason for the switch here.
Somehow related to an online tennis game.
Top

Although, this does not have any visual effect, it requires a lot work and refactoring (more than 500 lines of code added/changed in the past 2 weeks). Thanks Unity's UNET deprecation...
Somehow related to an online tennis game.
Top

Cons:
- Increased server load
- Players connecting far away from the server location will experience higher pings as before. However, additional dedicated servers at different countries can be established later if required.


I learned very much about message handling, serialization and networking in general. Although this task required so much work and did not bring new features, it was still a very important step towards Pixel Tennis' future.
Somehow related to an online tennis game.
Top

Gameplay
Reduced slice speed by 10% as it was to effective on online matches
Fixed smash indicator not disappearing under certain conditions
Somehow related to an online tennis game.
Top

*Currently only available on server side. Client still needs to provide a UI and the corresponding calls to make them available.

Menu Navigation / UI
Implemented nested prefabs to greatly improve UI structuring as Unity finally supports it in their LTS releases.
UI handling and instantiation rewritten based on a best practices menu system design. In numbers: These UI changes took about 20 hours to complete and resulted into a change of about 30k lines of (mostly generated) source files.
Remember logged in username between sessions
Fixed some UI elements being invisible on certain screen/window resolutions


Again, a big thanks @BoneD for helping out on the gameserver side!
Somehow related to an online tennis game.
Top